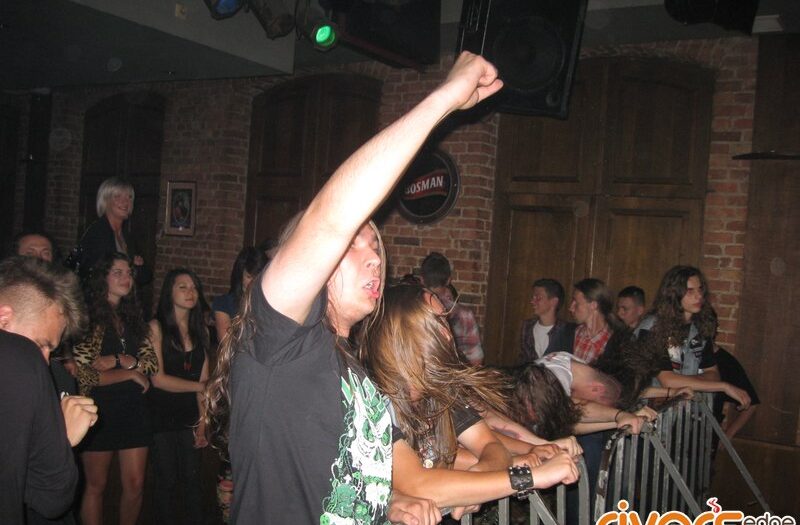 It was certainly one of the major events this year in Szczecin. For the first time in our town hosted thrash metal band from Brazil – Violator, supported by Witchrite from Gorzow Wielkopolski and local Headbanger. At the concert didn’t arrived Fueled By Fire from America, which also had to play this evening at SCK Kontrasty. Despite this fact, to the club came large amount of fans of heavy music who was playing very well.

Beginning of the concert was delayed a little bit, hence finally around 8 PM at the stage appeared four guys from Witchrite. The team consisting of Mlody (vocal), Stepien (guitar), Penti (bass) i Pewex (drums) gave the show of good thrash playing. In their repertoire were following songs: „Scorn”, „Liar”, „Streets of war”, „Fight the pain” and also „Rite of the witch” and two covers: „Troops of doom” from Sepultura (dedicated to the guests from Brazil) and “Stone dead forever” from Motörhead. Another band was Headbanger who this time performed exceptionally in three man squad: Martin (vocal and bass), Matt (guitar, known also from Mandylion band) and Radoslav (percussion). Only guitarist Junior was missed but actually without him the band played very well. With performing theirs most known tracks, kept in oldskool thrash style (e.g. „Ready to strike”, „Nuclear mosher”, „Brutal revenge” and „Headbanger”) they dragged into the scene crowds of long-haired fans dressed in black T-shirts with motifs of their favorite metal bands. An evening star was Violator who performed in the squad: Poney (screams and bass), Cambito (guitar), Capaca (guitar) and Batera (drums). There is nothing much to hide – guys gave us a show of a strong and fast playing on the global level. Outstanding figure was of course Poney, who moved very spontaneously along short scene. Violator performed songs like „Deadly sadistic experiments”, „The plague never dies” and few more.