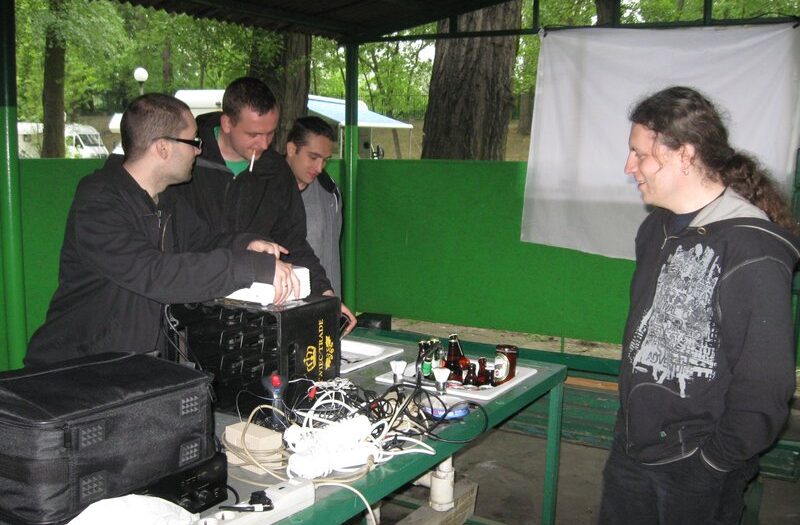 4th edition of C64 scene meeting called Stary Piernik took place on 15-17th of May 2009 at Torun in „Tramp” camping. For my long journey I went on the Saturday’s morning. Around 6 AM I entered to local train at Szczecin Zdunowo station. I was going into Poznan direction. After over 3 hours of wearisome travel I came to the destination place, where I changed to through train going to Torun direction. To the town famous from gingerbreads and Kopernik I arrived just before midday and straight from the station I went by a walk to the party place direction. The weather was cloudy and the environment was quite deserted. When I came to „Tramp” camping to my eyes appear complex of several wooden recreational houses enriched with eating house, toilet and also football and mini golf fields. Not so far away close to going out campfire was sitting small group of sceners: Killer, Kordiaukis, Prezes, Fenek and Wacek. I’ve joined them and presented myself to those one which previously I didn’t met in real life. Time was passing by with discussions about culinary experiments, curiousities about veterinary and not only about that. Next we concluded that it would be good to eat something and we went to nearby eating house where it was serving for example chard chop with poor quality of fries for 15 Polish zlotych. In meantime from the houses started to emerge sceners partying on previous evening: Barman, Gorzalek Ochlalek, eLBAN, Luke and Provee. TSL was sleeping very well but soon he got woke up by the team which came to his house with big scream :). After some time on the party place came Bimber with Browar. The first of them together with Wacek decided soon to doing preparations for the competitions. Hardware with my help we located in so-called cooking place – covered place with tables where built-in taps were frighten. Two front sinks were used as refrigerators for beers collected for Przeglad Regionalnych Piw (Overview of Regional Beers). When everything got prepared well, Bimber announced officially opening of meeting and soon he proceed to distribute really original idents on which view everyone reacted with live applause :). First time in whole history of C64 scene the role of idents was keeped by C64 keyboard covers made by firm Matt from Lodz! Everyone liked the idea and for sure it was really successful and unique event during whole meeting. Bimber distributed also 5’25 disk stickers which we had to glue to the idents and of course sign by the nickname. In meantime for the party place came Kisiel and in the background Fenek was trying to learn how to use 1541Ultimate. After the formal dealing of idents the team started with Przeglad Regionalnych Piw symbolically launched by Bimber with imitation of opening bottle by his eye. Soon on the move went different local beers which were judged by jury in taste, appearance and maltretation level categories :). In meantime the weather started to going bad more and more and the rain was drifting inside of the cooking place. Finally Bimber with Wacek decided to move all hardware to one of wooden houses and organize there competitions. And so it was done. Soon in quite extreme conditions we connect everything from the beginning and before competitions on big screen were displayed several Arise releases. In meantime on party place came Grabba accompanied by wife and daughter which eLBAN decided to learn few football chants :). Maja was doing quite well with another verses of song, but at a certain momend she decided to present her own version, which amused to tears all people collected in food house and even raised the interest of sitting close tourists from Germany. I’ve recorded this event and the movie is attached to this report. After some time the decision was made about starting the competitions. Part of them I’ve been leading by myself, playing warez which I brought by myself. Main star of the evening was of course Turbosnail, which 2 works from several years, coded in Basic, kicked out other rivals and caused most applause and peals of laughter. Quite much interests got my new version of Boulder Dash game, called Zulder Dash where Rockford caused of financial crisis, instead of diamonds collects in caves empty bottles. Few daredevils from audience were trying to play with first screen, but almost any of them was going with Rockford to the LEFT to die soon under the stone which of course was causing also a lot of laughing :). Neither TSL, nor Wacek and Provee couldn’t play well with Rockford, finally I showed to people how to pass this cave :). At the end I’ve presented new music collection called Cast To See, which however hasn’t enjoyed with so much attention. After dozen of minutes Bimber announced results of competitions and gave to the double winner – Turbosnail, colorful joystick made by Matt company. Other sceners were kindling the fire and started to fry some sausages. It couldn’t be of course without any circuit between Luke – eLBAN. It all started only because of taking the wood without the knowledge of the owner of camping. In meanwhile I’ve started to prepare to leave for a train, because from personal reasons I had to come back to home a little bit earlier. I said goodbye to all and with Bimber’s assistance I went to the train station. In such a way got finished my one day full of impressions at Stary Piernik 4.

Big thanks to Bimber for organizations the competitions and also for accompany while going for the train; Kordiaukis, Fenek and Browar for nice chats, Turbosnail for a lot of nice words and to Killer for storage of my backpack in his car. Also greetings to everyone, especially to Luke, Kisiel, Grabba and his family, eLBAN, Wacek, Provee (you were so drunk :), also Prezes, Barman and Gorzalek Ochlalek. See you on other meetings and parties!

All releases from Stary Piernik 4 can be found zipped here.