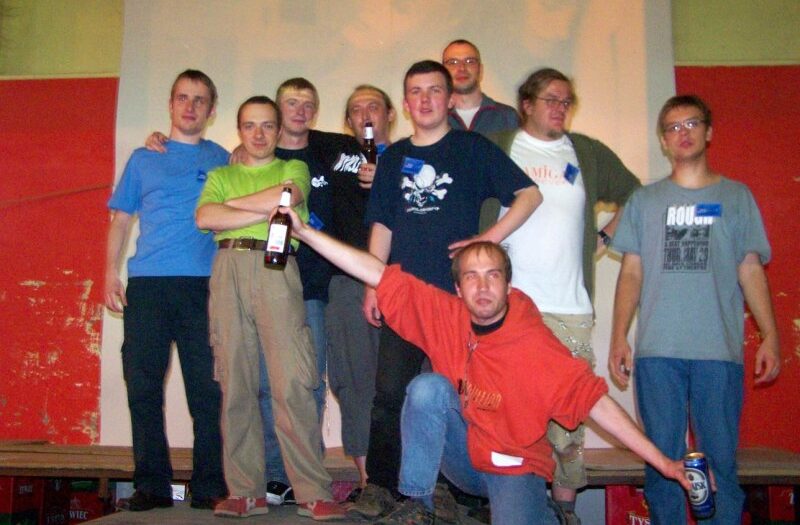 Second edition of Silesia Party took place on 15-17th of August 2008 in Centrum Rozrywki i Kultury „Traffic” at Czeladz. After some organisation problems which happened last year, from the function of main manager resigned BoBeR, which main role took Raf and Volcano, by which also first edition of Silesia could take place. This time failed mainly attendance because on the party came not so much than 30 persons. Atmosphere was generally calm and friendly and the place was really spacious and climatic. For the party I went with my girlfriend with and we were accompanied traditionally by Data/De-Koder/Tropyx. After reaching Katowice we went to the place around Empik, from where we went by a local bus to the Czeladz direction. When we arrived to the right place, we left our stuff in hotel and went with a map in our hands to locate “Traffic” club. Only dozen of minutes passed away when we found ourselves in the target of our walk.

Inside of party place, which incidentally day by day functions as skate park, was much deserted. At that time came maybe something about 20 persons so it could be said that this year edition of Silesia Party took place in truly family mood :). After greeting party people we started to talk about several things. Data located his C64 and he was trying to finish his tune for competitions. Some party people were drinking beer and watching played demos on the big screen. In meantime I presented to some people (for example to Ramos) basic service and operating principle of MMC Replay cartridge, which I took with me for the long journey.

Party was going slowly and without fireworks. Only outside the building heavy rain and storm started to tease and without generous support from Bedrich I would have serious problems with coming back to hotel. At night over Czeladz passed huge storm with hurricane and I was really wonder that there wasn’t any bigger damages around. Dreaming party people on the party place have been brutally torn from sleep by yelling alarm within building (which apparently was noising continuously until dawn and only intervention of owner after few hours helped to solve the problem). Saturday’s day has passing also carelessly and quietly, like one day before. Wnen after the midday I arrived again on party place, I received information that I’ve missed tournament game with Microprose Soccer, which winner was DJ Gruby (beating Ramos in final). However it wasn’t an end of attractions prepared by organizers. Soon they invited everyone for taking part in “What is the melody?” competition. 8 people decided to take part: Volcano, Sidder, Jammer, SuperNoise, Kisiel, CJ Warlock, Ramos and me :). Main idea was giving the name of performer or title of the song played by Raf in C64 version. The winners were Sidder, me and Jammer, but first one mentioned had access to the list of all songs just before the competition, so generally he had facilitated the whole job. The same group of songs from “What is the melody?” was next used in karaoke compo. Party people were rolling on the floor laughing, especially by extremely masterful vocal performances from Volcano and Nitro. Besides them in the roles of vocalists also stood Surgeon („Kolorowe kredki” rules!), Grabba, Raf, Splatterpunk, Sidder, Lolita and also me, performing song Policy Of Truth by Depeche Mode.

Another attraction was Bombmania tournament with which I’ve also took the part. I beaten in the half final my rivals (Surgeon, Galy and DJ Gruby) but the final game absolutely was for Raf.

Just before main competitions I started to spread cover to tool collection called Contribution 2/Apidya which finishing and publication on Silesia Party may owe to my disinterested engagement in this project. In meantime organizers distributed vote sheets and competitions has started. The amount of works were not so surprising, however enough to have vote for them by the people. For the first step went traditionally music competitions: 9 tunes, 1 stereo zak and 4 samples (also with my work called “Pocket Damage”). Next the sight of party people was delighted by the charm of 10 graphics, also with extremely Leming’s work which signed his navel with signature “Black Hole” using black marker and converted photo of his artwork he issued for the competition :).

4K intros were only 3, also like with demos among which found itself my production named “That Way”. After competitions I’ve collected congratulations for successul demo (for example from V0yager) and next I shared with the copy of my stuff to Stilgar :). Counting the votes went quite smoothly for organizers and after some time we were finally up with the results. Music competitions won Conrad, while me unexpectedly (and also slightly) won sample compo. In graphics competition the winner was Miras, in 4KB intro compo won unanimously Stilgar and my demo took first place in demo compo. I wasn’t hiding my happiness at that time and the results of competitions I recognized as my another small scene success. After exhaustive day full of emotions I deserved for leisure so I went to hotel. On the morning with my girlfriend we went directly to Katowice and soon we entered the train going to Szczecin direction. Our return trip unexpectedly got extended because we had over 2 hours of delay because of stop just before Opole. It turned out that raging this weekend storms over Silesia made more damages and blocked the travel line of trains. To home we arrived only after 8 PM, being solidly tired after whole day of journey. However in spite of everything the trip to Silesia Party 2 was successful for me and I hope that I will be able to take part in another editions :).

His memories with a little slip wrote: