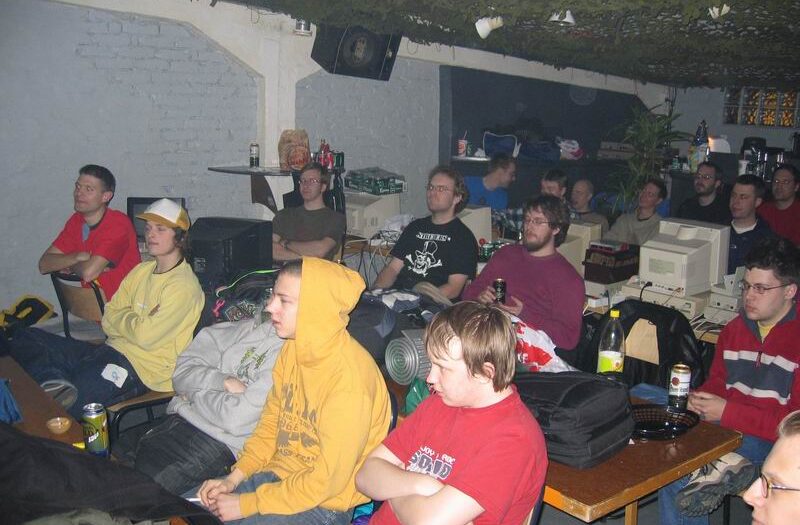 I started my lonely travel to Sweden on 24th of February riding by a train to Swinoujscie. I had some problems to arrive there, because one stupid woman didn’t wanted to sell me the ticket. So I had to travel very fast to the main train station in my town and luckily I was before the right time.

In the compartment I’ve met 2 guys looked like they were from Russia or something like that. We started to speak in Polish and we just realized, that we all are going to Sweden by the same ferry! Next both guys started to talk some funny jokes, so we had a lot of fun! One of them got his modern and colorful phone and started to play some polyphonic music.

When we arrived to Swinoujscie, those 2 guys left me, because they decided to go to the ferry with some persons with the car just to safe some money for the tickets. Because I already had bought the ticket I went to the ferry station and awaited for the passport and tickets control. It was a very cold evening. When I passed the passport control I went to the ferry, where I located myself and my baggage on the blue free air armchairs.

That place was a little bit cold, because it was located close to the end of the ferry, near the big windows. When the travel has started I was just sitting on the armchair, eating some food, next trying to sleep. It was very hard to sleep there, because some people were doing a lot of noises while having fun from playing with the money-games and drinking etc. Also it was really cold here! So I decided to put myself into my own jacket and try to sleep.

That was a very long night for me. At the morning, close before 6 A.M. I stood up and started to prepare to leave the ferry. I met one Polish girl, and we started to talk. Also we together passed the passport control and went to the train station. I helped her with hers baggages. When we entered the train we decided that we will buy the tickets from the conductor. I was very tired but enjoyed the first minutes in Ystad. The train was really awesome! First class! I’ve never seen such a nice train before.

When the conductor arrived, we had some problems with buying the ticket. When I bought the ticket for myself, luckily the ticket-machine which was kept by the conductor got damaged and those nice woman told to us “Okay, forget about it”. So we saved a little bit money because we both together paid only for one ticket :).

After some minutes of travel we arrived to Malmo where Iopop was awaited for me. I said goodbye for that girl and went together with Henrik to his place. I was looking around being for a first time in this new place. I was really interested about everything, especially for tall buildings.

In the middle of the walk we entered the shop to buy something to eat and we met there ED/Wrath Designs. I’m wonder why he didn’t arrived to the party? At Henrik’s place, after the dinner I decided to take some short sleeping, while Iopop was trying to fix small bug in his new demo. After one or two hours RaveGuru with JackAsser arrived by a car and we got ours stuff and arses into the car and started our travel to Helsingborg. I was really tired and even slept for a while in a car :). Finally we arrived to the Floppy party place, located at the centre of Helsingborg in a little underground club. There was only a few persons at the party place. I met Jucke and Motley :))). We had a nice long talks about everything. The party place was really small and stuffed with the tables and chairs. Most of the sceners brought with themselves C64 hardware, 2 persons or more cheated with the laptops.

After some hours another sceners has arrived and I met another nice persons like Hollowman, Puterman, Twoflower, Blackdroid, Maktone and others. Later at the main corner there were located a bunch of drunkers watching probably some Amiga demos, listening to Italo Disco music and dancing too:). Maktone and team had a lot of fun there! But not me. Exactly I felt quite lonely at the Floppy party. Almost nobody to talk with. Most of the persons was busy with finishing the party stuff. I awaited for Rambones beacuse I supposed that he will arrive. But he didn’t. Also I missed my girlfriend and I was spending most of the time at the party place being lonely. Later, being very tired I went to sleep after the main speakers. There was one and only free place to sleep :). Some of the party freaks just slept at the main tunnel, everywhere. Next day I spent most of time on showing some demos at the big screen and browsing into Jucke’s discs. I’ve found some nice stuff and copied for myself. Also I decided to paint my own Petscii screen for the C/G compo and I created funny Floppy logo. Before this, Motley organized International Karate compo. I took the part with it too but I’ve lost the second fight. The organization of this game compo was totally bad. I was awaited for the Hat-Trick game compo too, but Motley was gone somewhere and this competition got cancelled. I was walking around and collecting the beer cans for my own cans collection. And also I met Dino which was preparing his own Petscii show for the competitions.

I gave my music and Petscii graphic to Taper (really cool person!) and awaited for the main compos. Because nobody wanted to talk by a microphone Jucke was using SAM Reciter to speak about everything. Some of the handles sounded very funny while speaking on C64 :). The whole competitions was official. There wasn’t blank screen while playing the tunes. So everyone knows who made what. Competitions was really cool! I had a lot of fun watching and listening all the stuff. I was surprised, that MacX took the part with the competitions with his first tune, which was actually horrible :).

While playing my own tune some sceners like Hollowman started to dance. Puterman said that this tune is better than my old tunes. The applause was very big! But later because of friendly voting the results was really different, than the applause of the audience.

Goto80 won the music compo with his really experimental but nice tune, Twoflower won with the graphics compo deservedly and Triad with demo compo. Also Jucke won with C/G compo. I was quite disappointed from HCL’s new demo which contained mostly designed graphics, not any special effects. After the results which was presented on the bigscreen written on the C64 by Taper or someone else, the sceners got the funny prices like farts generator etc :). Also the winners got the picture with Motley’s face on it :). Next I met really nice person called Zzap69 with which I had really interesting chat. Next JackAsser supported me to combine the train connection to the Ystad because I had to come back lonely. I was really tired and went to sleep again after the speakers.

Some of the guys woke me up after few hours and I together with Iopop went to the train station. I bought the ticked and entered the train. I arrived to Malmo and had small problems to find the right platform but luckily I’ve found right place and right train and entered in. When I arrived to Ystad I went to the ferry station and awaited for the ticket control. It was the Sunday, 2 P.M. when I started my travel back to Poland.

I went to shop and bought some food. Next I slept a while or I was sitting bored. Finally I arrived to Swinoujscie where I met one Polish guy with which together I went to the train. There was almost only sleeping carriages and we found only one normal from the first class. But never compare Polish trains with the Swedish! Swedish ones are really great!

The conductors said to us that currently they cannot sell to us the tickets but they will do that later. I was really surprised by the amount of the snow there. And I was really happy from that! The conductor said that this train is not stopping in Szczecin Dabie so I had to change my plans and I decided to travel to the centre of my town. When I arrived to Szczecin I went outside and going into the big snow I went to the cinema, where my sister is working. It was close to midnight and I was really tired and hungry. We both together came back to the town by the night bus and my long Floppy 2005 travel was finally finished.

I would like to thanx Iopop for main support, Djinn for map and some explanations support, JackAsser and RaveGuru for car support, JackAsser and Hollowman for personal support, Puterman for vinyls and for Goto80 for friendly support during the party! I’m happy that I fulfilled one of my dreams! Greetings to all party freaks and see ya somewhere in time!

This report was made exclusively for the last issue of C64 discmag Scene World, published by German group called People of Liberty. I’ve been working at that time for SWO staff and I’ve been editor of Charts, Addressess, News, Reactions, and Active Websites & Sceners chapters. Keeping Charts has been also associated with so-called spreading and counting the votesheets.

I wrote this report on 25th of July 2005 and it was released on 1st of September 2005 in Scene World #15/People Of Liberty discmag in Party Scene section. Here you can find original text in which I made a small correction of errors. I’ve also added some missed facts, memorial scan of ident, screenshoot from Scene World #15 and few photos from Eleric and Vodka.