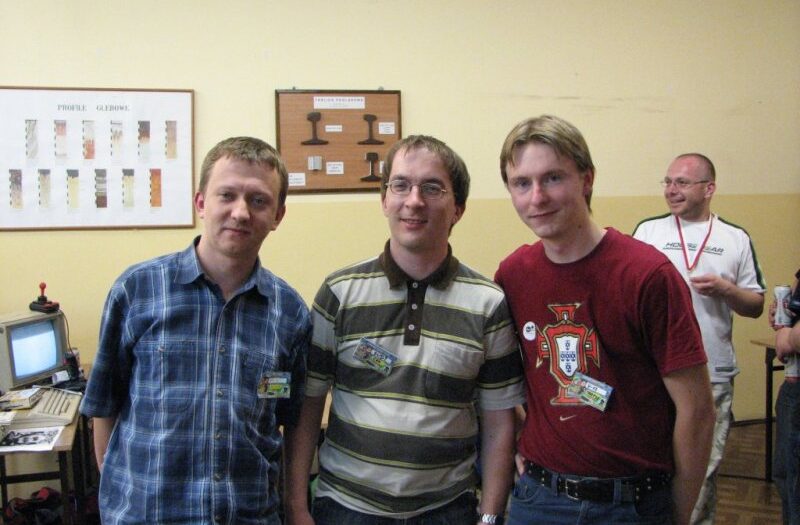 Party in Silesia? Why not! Party in Silesia, additionally in school? It may sound more intriguing :). Silesia Party was created from initiative of BoBeR who after last edition of North Party decided to make his own party. His plan was implemented with varying results about which I will tell in a moment.

Silesia Party 1 took place on 5-7th of July 2007 in Zespol Szkol Technicznych i Ogolnoksztalcacych in Katowice. Personally whole event I considered as new experience because in my quite long scene career I wasn’t be on party with Commodore people in school :). For the party I was forced to go only in Saturday (6th of July) because one day before I was whole day in work and simply I had no strength to travel whole night in a train. The distance to overcome was substantial – more than 500 km. For party I had to go together with Silent Riot (main organizer of all Symphony editions) who declared spontaneously, that he will enter the same train which I will be going on the morning to Katowice direction. Unfortunately he failed with his promises but he finally came to party, much later than me :). Thanks for this I had a lonely trip, which was stretching incredibly.

In Katowice I went to the bus station and after few minutes of waiting I’ve realized that today is Saturday and public transportation runs this day quite different. I’ve immediately stated that I will be not waiting eternally for the bus and I decided to take the taxi located near me. After several minutes the driver brought me around Technikow street but because of poor denotation of all objects he had to make one full circle before he found given by me location. At the entrance for party place greeted me nice woman and told me to write on the list. Next I met in the corridor a small group of party people with Moog on top. When I’ve entered to the class, which was a main party place, to my eyes appeared a number of sceners from which some of them were playing with Bombmania and others were discussing about everything. Luckily I got last one available ident from organizers and next I started to learn from others what I’ve missed till this time. To my eyes appeared big hole in one of window panes and soon one of party people told me that the perpetrator of that harm is… main organizer BoBeR who wanted to throw away the empty bottle from vodka out the window. At party there was an exceptionally prohibition, simply ban for taking and consumption of alcohol. However not so much people accepted this rule so it was hard to expect that BoBeR will be taking everything with peace.

Besides alcohol revelations I’ve missed also football cup in which winning medals and cup in the form of golden C64 main board got team called “Hurricane Arise” consisted of: Bimber, Elban, Gorzałek Ochlałek, Prezes, Black and DJ Gruby. Before cup has started, someone found the idea (perhaps it was Prezes) to simply go for… Sebaloz 🙂 due to the fact that he is living in Katowice and didn’t came for party. Few sceners with Provee and Prezes on top went to his flat and culturally by the door phone called out Sebaloz from his cave :).

In meantime I was discussing with old friends and meeting new faces, for example Jericho (with which I was swapping in good old years) and Remedy with which I’ve been recalling golden swap years and we also talked quite much about music :). I was then encouraged to get acquainted with The Breakfastaz creation and with revenge I invited Remedy to immerse with Marusha album titled “Offbeat”. Atmosphere was quite familiar which proof was for example presence of wife and pleasant Grabba’s daughter named Maja which even perhaps treated me with chips :). Soon at party place came mentioned earlier Sebaloz who on my view stated, that I’m Cactus and next he also mentioned two other nicknames, every time failed with saying proper one. I don’t know what currently this man is taking… 😉

At the party place finally came Silent Riot, who make a small surprise for other sceners by passing the entrance with beers in his pockets. For the question, how he made it, he answered, that he told the man who was standing by the doors, that he is going here “on business” :). It is worth to mention that on the party came generally many missed faces, for example Druid, Shogoon, Robak, Praiser, Pajda, Mr. Fiz, Harpoon, Hornet, Isildur, Daf and also mentioned before Jericho who in the evening became an object of interests from party people after falling into sleep on the chair being really tired from drinking.

On the party place was going all the time Kisiel who was doing photos mostly for girls :). Later while watching those photos we had a really nice comedy, also disarming laugh of Kisiel was filling inside of the party place :). In my memory stuck also dialogue with Grabba, who while looking at standing globe on bookcase stated, that this is perhaps not these years, because a man wants to do something with this but something stops him :). Thanks for that none of class equipments wasn’t damaged (except of course mentioned earlier window). Soon competitions has started on which brought quite much amount of works. Occasionally from the deep of room came different comments for each productions, from which most unforgettable for me was Silent’s shout “Violenceeeee!!!” while listening of Surgeon’s tune :). I’ve spent whole competitions accompanied by Remedy and CJ Warlock and in meantime I’ve also discussed with Daf, which I had an occasion to meet. The quality of all works was quite various and mainly demos with good quality was missed. Beyond competitions one small Basic demo was presented which was titled “XXX Land” and was done by Surgeon. It was quite a fake demo and thematically directed against Samar group. Ramos, while watching this production, wasn’t fascinated at all. For all uninitiated it is worth to mention, that all competitions were carried with using big color TV, because from technical reasons it wasn’t possible to connect projector.

While choral singing during playing one of stereo songs, which was a cover of “Boys” from Sabrina, unexpectedly came to us entrance guardian and started to scream that soon he will kick out us from there, because we behave too loud :). The atmosphere was quite tensed but luckily party was not interrupted. It was one of most unforgettable moments at Silesia Party 1 and the guardian, who was baptized by the sceners with the name of Chuck Norris, was a main theme of discussions after party for long time.

After competitions part of people went away from class and others had big fun from Jericho’s demise, on whose head soon put 5’25 disc and plastic cup. After funny photo session with the background of unique (and also currently very rare at Polish C64 parties) image, further expectations for results announcement has started. A couple of minutes passed away when Volcano presented results from competitions, according to which my tune got 10th place and sample module got 2nd place. Each of participants could choose some price from available pile of different hardware and software C64 gadgets. My booty was some original games on cartridges and also in meantime I was endowed by Ben Vansen with a box of pirate tapes.

Party place was quite deserted at that time and I was one of few persons who stayed by overnight discussions (for example with eLBAN). On the morning evacuation from party place has started. Some of sceners BoBeR had to brutally snatch from sleep, because main time of leaving the building was set for midday. With a courtesy of Leming, who came at party place from England by a car, we got with him in a return journey. Randy, Data and Silent Riot accompanied us and Silent with his announcer’s talent was fulfilling most of the time of our travel by telling about some funny stories. Earlier we visited shopping center before which held memorable discussion about various themes, during which Silent was perfectly extinguished by Data’s text: “Easy. Hold on for a moment and next we will go to zoo” :). Leming was riding very fast and from the CD player flew Randy’s compositions, often inspired from RMB creation. While one of stops Leming almost died from laugh while listening another Silent’s stories from other parties :). We made also big sensation while entering to Poznan and listening C64 music with the high volume :). There we had to say goodbye to each other and everyone went to his own direction. I with Data went to train in direction of Szczecin and after some hours finally I’ve arrived to my home.

After party it turned out that organizers made mistake while counting vote sheets and not all columns with the numbers in Excel were included, thus finally results of competitions have changed. My tune got 14th, second composition with Data got located at the end of list and also my sample module got at the end 3rd place. Anyway I consider this party for a really successful and full of amazing adventures :). I also have hope, that in future I will be able to meet with party people in school again :).

His memories with a little slip wrote:

Thanks to Data for finding and sharing with the movies from party after the years :).