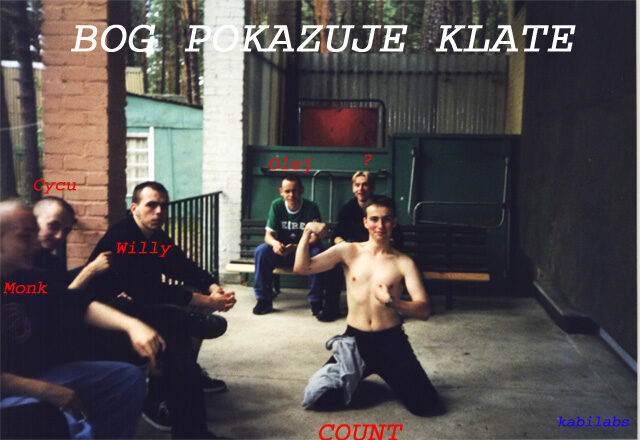 The second edition of multiplatform party under name „Symphony” took place this time in the one little town Tuczno in Poland, not in Trzcianka like last year. I remember average level of my fist party, that I ever was Satellite 2000. In the middle of my journey I was in a little hope, that this time I will be on better party than last time.

I started my travel with two my friends: Spider and Olej, who wasn’t from the C64 scene. We met one Amiga scener called GDR! and with him we entered into train. We entered into one compartment, where was 3 unknown people and got our baggages inside. And of course we started our conversation about scene, computers and jokes. Spider decided to drink something and got his little bottle of vodka. He together with Olej had starting to drink it, GDR decided only to taste it.

The train got the Trzcianka place, so we left it and recognized, that on the station are plenty of sceners! We met more people like Dakota, Biolog, Willy, Deadman (all non-C64 Sceners). Biolog got with himself his old crappy PC and when he throw it, rest of people started to kick it! After few seconds PC was ruined :). One woman started to scream to us, next one policeman went here and told: „There is no place to drink!”. Nobody listened him :). Spider with Dakota and Olej went into one shop of course for some alcohol. I stayed lonely with his baggages. So I started to talk with Willy, next with Biolog and Deadman about music. We talked about our favourite Metal bands. I together with Deadman sing Running Wild songs :).

Next we waited for party bus. The journey by bus into party place was the one nightmare, especially for the driver! One bus full of scerens, most of them was very drunk, together sing some wild songs, one of them want to go out… The Driver was very bad and told that he will not get us back after party. Finally, we got into party place – the Tree’s Centre. Lake, trees, other people… Spider started to connect his C64 into plugs, I visited the place. After some time I met Gały/Tropyx and we started to talk, we didn’t saw us 1.5 year. Next we sit upon our Commy and present for some Amiga and PC users C64 demos. One guy went to us and asked: you all are from C64 scene? I answered: no only I and he. I looked at him and…what I see? Fenek/Arise! Long time! Well only 1.5 year :). So we started to talk, of course about coding! Well, Fenek was the one and only guy, with him I spent most time on the party place. That wasn’t empty conversations about nothing but very important talks about C64 coding and other problems. On the party was two guys from Germany! One of them was Topy44 from the origin Switzerland and he had one digital photo-camera and funny cow mascot :). I talked of course with him about Welle: Erdball band and he told me, that he of course know them! Next I met V0yager – the man – the legend, he was the editor of the Polish commercial paper mag called Commodore & Amiga few years ago. And now he decided to back into C64 and he started to compose once again music. That was nice to met him. Party freaks most of time spent on boozing, party was very long – 4 full days. The projector was very big like Russian tank, the organizers played sometimes very strange music. We had to watch more PC animations and MPEG’s, more Amiga demos and music too… On the evening we asked the organizers that we can show some C64 demos on the projector. He agreed and we started our show! Fenek played the demos like “Pijak Potrafi” , “Deep Blue” (both by Arise) and some sceners with me jumped and was dancing with the C64 music! The main organiser – Silentriot told “now I feel that party has started!”. After this I spent long time with Fenek and V0yager. And that was the first day of the party. I slept only 4 hours, it was very cold and horrible. Olej told me, that Spider last day was drunk and throw out! I asked Spider: do you remember something? and he answered: no :). Some sceners spent more time with that second guy from Germany with boozing and learning bad polish words. I talked with him about Welle: Erdbal. He was on the Mekka 2000 and had T-shirt from this party. Next one guy got his camera and Cycu together with Deadman started to show his asses :). Silentriot was very bad for this, more – he was so frustrated cause there was one dangerous, that party will be finished! So the guilty sceners told, that they will be boozing in the forest :). And one big band with the Deadman with the broken old monitor on the head went into shop for some wine :). That was very funny! On the evening we once again started to show C64 demos, this time without dancing but more Amiga sceners was very impressive cause of C64 music. Fenek showed Deus Ex Machina and we both realized, that this sucking projector is very stative and didn’t show interlace! Fenek went for his grill and I showed some demos. After „Movie World” one guy turn off the projector cause he was so hot. Silentriot told about deadline and decided to make an order with party stuff. I was upon this. Upon the midnight the fuses crashed up and we’ve been without voltage and light :). But for not so long. Sceners talked about Bin Laden hehe. I went sleep and woke up on 4 AM and I played with Gały on C64 with Psycho Pix UXB and 10th Frame Bowling :))). Next I went once again sleep and woke up on 8 AM very hungry. So another visit in the shop for a little food.

The third day was a msx and gfx compo day. Silent played some SID’s on the main PC, I decided to play some other music. Cause I know plenty of good C64 music, he not. So I had only shitty Sidplayer and some downloaded SID’s with strange titles. But I played it. I played some movies on the bigscreen too. When I played Tomas Danko tune on the party place entered another C64 sceners! Sebaloz, Bzyk and Provee. They didn’t knowed, who play the tunes :). I went to Sebaloz, who when he was trying to open a bottle with the water he pour it on him :). Next I met Bzyk and Provee (for the first time). I had long conversation with Bzyk about his C64 Internet portal emu64, about my articles and some other problems. Next Provee asked me about Agnes. I was very surprised cause of this but I answered „nothing changes from half year…”. One drunk lamer got Bzyk’s beer and pour it on us. Fenek was bad, we too. After some minutes the same guy with the scissors wanted to cut some hair. Provee was very bad and wanted to kick him. After this on the party arrived another C64 sceners like Elban, Butt-Man, Bimber, Browar. After msx compo was crazy compo. First of all was „bek compo” (belch compo) , next was „pokaż dupę compo” (show ass compo) with two entries! But one drunk stupid lamer got the bottle with the water and pour it on the guy, who had the microphone and held on the crazy compo. That guy was very bad and left the place. After some time the msx compo has started. It was very boring… Listening to shitty Mp3 tunes… The main organizer decided to connect the C64 music compo with the chip compo and I was very bad cause of this. And msx compo was very late, after midnight.

After msx compo rest sceners on the party place decided to get the gfx compo in another day. I didn’t sleep that rest of night cause my place for sleep has gone. I asked Silentriot about partybus back after party and he told that he have too little money and it not will be… I decided to leave the party place cause 2 days after I had qualification talking for studies. So last days of party was without me. Rest I know only from Spider. There was one football match – C64 contra rest of scene. And we won! On the party place was Gryf and Jemasoft/Quartet – the legend of our scene! But I don’t met him, shame…

What I can tell now about this party. Well it was better than Satellite 2000 but wasn’t good too. But that was nice to met some C64 sceners live… Sorry for this chaotic chapter…

This is an English version of Symphony 2002 Report which I wrote exclusively for the C64 discmag Scene World, published by the German group called People of Liberty. It is much shorter than the original, and contains many grammatical errors.

I wrote this report on 9th of August 2002 and it was released on 1st of November 2002 in Scene World #5/People Of Liberty discmag in the Party Scene section. Original Polish version was released on 13th of March 2003 in Inverse #11/Oxygen64 and on 2nd of April 2003 in PC discmag The Beast #4/The Grid.

Here you can find the original text in which I made a small correction of errors and expanded with a screenshoots from Inverse and Scene World discmags, few photos by Azzaro, KBI, BamboOS, Ken_k and scans of  ident.